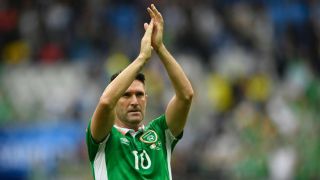 Robbie Keane marked his international farewell in style by scoring Republic of Ireland's second goal in a resounding 4-0 friendly victory over Oman at the Aviva Stadium.

Robbie Brady was also on target while Jon Walters added a double as Martin O'Neill's men proved far too strong for Oman.

But it was Keane who inevitably took centre-stage on Wednesday, celebrating his 146th and final cap in fitting fashion.

The 36-year-old netted his 68th international goal with a fine demonstration of his striking prowess, volleying in from close range after to make it 2-0 after 30 minutes.

Keane was replaced by Wes Hoolahan in the 57th minute, leaving to a prolonged standing ovation as the curtain finally fell on an illustrious international career that began back in March 1998.

Ireland's victory made it just one defeat in their last 14 home games ahead of Monday's World Cup qualifier with Serbia in Belgrade.

Seamus Coleman, John O'Shea and James McCarthy, who watched on from the stands, are all expected to be fit enough to feature in that clash.

Oman threatened early as Abdulaziz Al Muqbali's header forced Kieran Westwood into action, but it was one-way traffic after that and Ireland took the lead in the eighth minute.

Yasin Al Shiyadi was rather harshly adjudged to have fouled Walters on the edge of the box and Brady stepped up to clip the resulting free-kick over the wall into the bottom-left corner of the net.

Walters tormented the Oman defence throughout, teeing up Keane for a blocked effort after 13 minutes and then meeting a Cyrus Christie cross only to be denied by the post.

Keane again went close to doubling the lead as he took advantage of a mistake from Shiyadi to reach Glenn Whelan's throughball, but saw his chipped finish land on the roof of the net.

However, Keane was not to be denied on the half-hour mark, flicking the ball over the head of his marker after being picked out by Walters and lashing a superb volley past Faiz Al-Rushaidi.

Four minutes later, Walters got the goal his performance deserved, popping up between two defenders to nod home a superb Brady cross from the left.

Walters should have made it 4-0 before the break, however, he could only head a Christie cross wastefully over.

O'Neill made four changes at the start of the second-half, introducing Darren Randolph, Jeff Hendrick, James McClean and Stephen Ward from the bench.

In the wake of Keane's emotional departure, Harry Arter and Stephen Quinn both went close before Walters doubled his tally after 62 minutes.

Played in by Hoolahan, Walters rounded the goalkeeper and managed to find the net from an acute angle, but - despite an impressive performance from the Stoke City forward - the night belonged to Keane.