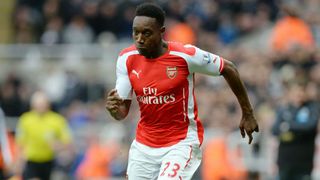 Arsenal manager Arsene Wenger is not planning on making further additions in January as he believes the returning Danny Welbeck is better than anyone available on the market.

Wenger made his first foray in the current window on Thursday with the signing of Basel midfielder Mohamed Elneny.

The Frenchman, whose side are top of the Premier League on goal difference from Leicester City, was quizzed on his plans for the remainder of January in his media briefing on Friday.

But Wenger believes it is more important to get the likes of Welbeck, who has been out since April with a knee injury, and Jack Wilshere (ankle) off the treatment table and back on the pitch.

"Ideally, personally, I would prefer to have the players back from injuries [rather than go back into the market]," he said.

"Welbeck, for example, who has been out since April last year is now two or three weeks away. I am confident I won't find a better player than Welbeck on the market. I prefer to have the injured players back with everyone available."

One signing Wenger did make in the January window was Theo Walcott a decade ago when the England forward was just 16.

At the time Walcott was tipped to have a glittering career, but thus far the only major trophies he has won are the FA Cup in 2014 and 2015, while injuries have halted his progress at times.

But Wenger believes the best is yet to come from the 26-year-old.

"Walcott came here at 16 years of age, he went to the World Cup without playing a Premier League game," Wenger added.

"The credit I give to him is that he did well with the early fame, kept his feet on ground and was receptive to advice. There have been ups and downs because of injuries and that made him much stronger mentally.

"The next four or five years will be absolutely decisive for him. It is where you make your career between 26 and 31, 32. That's where a good player becomes a great player."