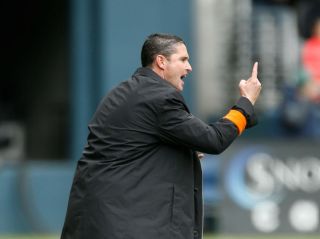 The New England Revolution have made their first transfer acquisition of the MLS offseason, picking up Guinea-Bissau defender Sambinha from Sporting Clube de Portugal on a loan deal, the team announced Friday.

The Revolution have an option to sign Sambinha at the end of the loan, which covers the entirety of the 2016 MLS season.

“Sambinha is a big, strong center back who impressed both myself and Jay (Heaps) during our recent trip to Lisbon,” Revolution general manager Michael Burns said in a statement on the Revolution’s official website. “He will be able to help strengthen our defense and we are grateful to be able to work with Sporting in order to add a player of his quality to our roster for the upcoming season.”

The 6-1 defender has played his last two seasons with Sporting Clube de Portugal’s B team in Portugal’s second division. The 23-year-old was born in Portugal but has chosen to represent Guinea-Bissau internationally, picking up four senior caps.

The Revolution, who were ousted in the wild-card round of the MLS playoffs this past season, open their campaign against the Houston Dynamo on Mar. 6.