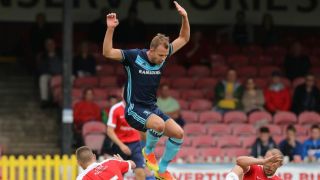 Premier League new boys Middlesbrough got their pre-season off to a flyer with a 6-0 win over York City at Bootham Crescent.

Carlos De Pena steered Albert Adomah's cross in off goalkeeper Scott Flinders to put the visitors ahead, before David Nugent converted at the second attempt from close range and then teed up Adomah to make it 3-0 after just 33 minutes.

Boro made a raft of changes at the break, with De Roon and Jordan McGhee getting their first taste of action for the club, and Rhodes got his first of the game with a fine turn and finish on 64 minutes.

Adam Reach made it 5-0 when he lofted the ball over the keeper and into the net, before Rhodes netted the sixth and final goal, converting from close range just over five minutes after Matty Dixon had rattled the crossbar for York.