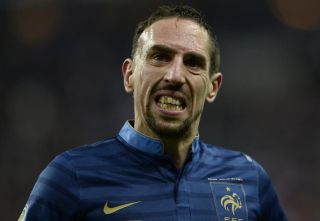 After their maiden World Cup triumph on home soil in 1998, France were eliminated in the group stages four years later, before finishing as runners-up in 2006 and making another pool-stage exit in South Africa.

France needed to beat Ukraine in a play-off to qualify for this year's showpiece in South America, and Ribery insists getting out of their group with Honduras, Ecuador and Switzerland is France's priority.

"We're delighted to be among the 32 teams who will have the privilege of playing out there," the Bayern Munich star told FIFA.com.

"We're going to do our utmost to have a good tournament and to give the French fans something to cheer about, which is a big motivation."

Ribery, who finished third in the FIFA Ballon d'Or behind Cristiano Ronaldo and Lionel Messi earlier this month, hopes his character can help the younger players in France's squad adapt to the pressure of the finals.

"I'm not afraid of anything," he added.  "I'm very strong mentally. I have a lot of character. I never give in - I always have the drive to keep going and to work hard to achieve my goals.

"I talk to the younger France players a lot, particularly the lads who haven’t been in that many squads.

"We represent a big country and the blue shirt can weigh heavy on the shoulders.

"There’s a lot of pressure and it’s not always easy to deal with. So I try to get the younger players in the best possible frame of mind.

"You have to make the most of the experience and relish it."