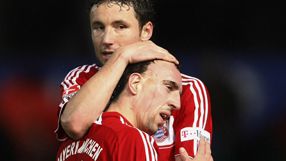 Frenchman Ribery, who has not played since September 21 after tearing a right ankle ligament, has been back in training but a trip to France for a funeral forced him to postpone his much-awaited return to the squad last week.

Neither Ribery nor Dutchman Van Bommel, who returned to training on Wednesday following his four-week absence due to a knee injury aggravated on international duty in October, are expected to start against Nuremberg.

But their mere presence on the bench will boost the champions' confidence after a string of injuries that have also ruled out Arjen Robben and strikers Miroslav Klose and Ivica Olic.

"Of course I want to play but I know that training at the moment is the most important thing," Ribery said on Wednesday.

Coach Louis van Gaal has managed to steer Bayern into the Champions League round of 16 despite the absences but, in the Bundesliga, they are languishing in ninth place with 16 points from 11 games, 12 behind leaders Borussia Dortmund.

At one point, he was left with a total of 15 fit players in the squad, with only three outfield substitutes.

"After such long absences you do have to be patient but it is very good for the team that they are back," said Bastian Schweinsteiger, who took over some of Van Bommel's midfield duties in his absence.

Ribery and Van Bommel could also be joined on the bench by left-back Diego Contento, who is on his way back to full fitness after a six-week absence following a groin injury.

Nuremberg, joint-sixth with Hamburg on 18 points after their fine start to the season, could be without Mehmet Ekici as the influential midfielder, on loan from Bayern this season, is nursing a flu virus.

Sparkling Borussia Dortmund can provisionally extend their four-point lead at the top when they host Hamburg SV on Friday, with second-placed Mainz 05 at home to Hanover 96 on Saturday.

Werder Bremen coach Thomas Schaaf will be feeling the pressure when his team take on in-form Eintracht Frankfurt after an embarrassing 6-0 loss to VfB Stuttgart last week left the Champions League competitors in 11th place on 14 points.