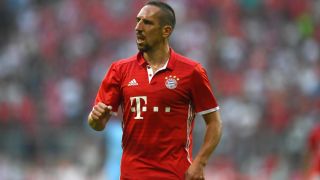 Franck Ribery is in contention to play in Sunday's DFL-Supercup clash between Bayern Munich and Borussia Dortmund after returning to full training on Tuesday.

The 33-year-old took part in what the club described as an "intense" solo session on Monday in a bid to boost his recovery from an adductor injury, which had kept him out of the International Champions Cup defeat to Real Madrid on August 4.

However, the retired France international resumed full training with the squad early on Tuesday before completing a second fitness session alongside compatriot Kingsley Coman, boosting his chances of featuring against Dortmund at Signal Iduna Park this weekend.

Xabi Alonso completed an indoor session and is expected to resume full training on Thursday, while Douglas Costa completed a 20-minute running session out on the pitch.

Carlo Ancelotti is still facing a number of other injury headaches ahead of the season's curtain-raiser, however.

Jerome Boateng, Arjen Robben and Holger Badstuber are continuing recovery programmes and are all unlikely to be risked against Dortmund.

New signing Renato Sanches is also sidelined four up to four weeks as a result of a thigh injury picked up in Portugal's Euro 2016 final win over France last month.