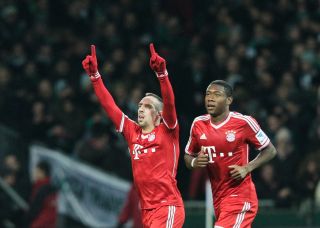 Ribery returned to training on Thursday ahead of the club's Bundesliga fixture at the weekend, as Bayern look to extend their 13-point lead at the top of the table.

The Frenchman – who finished third in the 2013 FIFA Ballon d'Or vote – has not made a competitive appearance in 2014.

His only outing this year came in a 2-0 friendly win over Al Merreikh on January 9, with muscular problems sidelining him since.

"I hope that I can play on Sunday against Frankfurt," Ribery told Bild.

"We (did) not want to take any risks (hence my recent absence)."

Ribery last played a Bundesliga match on December 14, but he did help the European champions to victory in the FIFA Club World Cup after that.