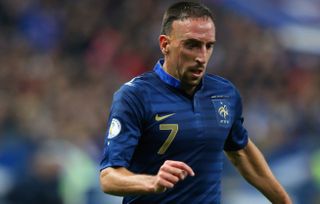 Didier Deschamps' men finished second behind Spain in UEFA qualifying Group I and need to beat Ukraine in a two-legged play-off next month in they are to reach next year's tournament in Brazil.

Ribery has been in fine form for his country in recent games, scoring four goals in his last three international appearances.

France last failed to qualify for the World Cup in 1994 and Bayern Munich man Ribery is eager to ensure that they avoid the same fate this time around.

"I simply cannot imagine the France team not at the World Cup," he told German news agency SID.

"It would be a disaster for us, for everyone, for all of France.

"We have to play as always, do not be afraid and do not stress."

France, who were crowned world champions in 1998, travel to Ukraine for the first leg of their play-off on November 15, before hosting Mykhaylo Fomenko's men four days later.