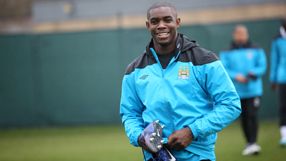 Manchester City defender Micah Richards has recovered from a hamstring strain and is fit to face Manchester United in Monday's potential title decider at the Etihad Stadium.

"I've had a tight hamstring, it's the same thing that's kept me out previously this season," the defender told City's website.

"The manager didn't want to take any risks so he told me to get some treatment and rest. Whether I'm going to be involved or not I don't know. I had full training on Wednesday and it was fine."

Gary Cahill has been ruled out of Chelsea's home clash with Queens Park Rangers on Sunday with the hamstring injury that forced him off early in his side's Champions League semi-final against Barcelona on Tuesday.

Chelsea are in sixth place in the Premier League, four points behind Newcastle United who are in fourth spot, the last Champions League berth.

Queens Park Rangers are without Adel Taarabt after his sending-off against Tottenham Hotspur last week. Taarabt, who scored the winner against Spurs, has a one-match ban.

Tottenham Hotspur, who have managed just one win in their last nine league games to slip to fifth, hope to have Younes Kaboul back for the visit of Blackburn Rovers on Sunday.

Emmanuel Adebayor, who also missed the 1-0 defeat at QPR last week, is expected to return but left-back Benoit Assou Ekotto is out for the rest of the season with a shoulder injury.

Third-placed Arsenal are without Theo Walcott for the trip to Stoke City on Saturday after he suffered a hamstring strain against Chelsea last week.

Tomas Rosicky has shaken off an illness and should feature, however, while Abou Diaby has a chance of making the squad.

Newcastle United travel to Wigan Athletic on Saturday for a game of vital importance to both sides.

Newcastle are closing in on a top-four finish while Wigan are one place above the relegation zone.

Wigan hope to have Franco Di Santo fit after he hurt his calf last week and Hugo Rodallega may also be in contention after recovering from a knee injury.

Newcastle are without Steven Taylor and Peter Lovenkrands.

Bolton Wanderers manager Owen Coyle is asking several players to play through the pain barrier as the club's battle to avoid relegation continues at Sunderland on Saturday.

Six of the players who featured in the 2-1 victory at Aston Villa on Tuesday, a win that took them to within a point of W