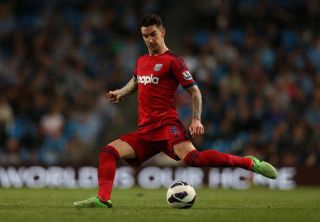 The defender sustained the injury in Monday's 3-1 defeat to Manchester City, and will now miss Saturday's game against West Ham and the trip to Arsenal eight days later.

The club hope he will return in time for the final two matches - against Sunderland and Stoke City - as West Brom continue to struggle against relegation, but Ridgewell's absence is tempered by the news that Gareth McAuley is back available for the visit of Sam Allardyce's men.

"Scans have revealed he (Ridgewell) suffered medial ligament damage to his left knee, ruling him out of Saturday's home clash with West Ham and Sunday week's trip to Arsenal," a statement on the official website read.

"Gareth McAuley is in contention for a return to action against the Hammers.

"The Baggies centre-half was forced to sit out the Etihad Stadium encounter due to a calf problem he sustained in training."

A win on Saturday would go a long way to securing West Brom's survival and, with the team hovering just three points above the drop zone, captain Jonas Olsson is desperate to claim the points they need.

"We need to get over that line sooner rather than later," he said. "And why not on Saturday?

"We will focus totally on that and get ready for it.

"Of course it will be a different game to Man City but we will speak about it and we will have time to prepare and make sure we're ready."