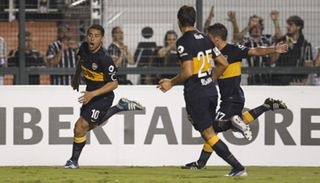 Boca, who won the first leg 1-0 at La Bombonera, advanced 2-1 on aggregate to an all-Argentine tie against Rosario-based Newell's Old Boys with the first leg in Buenos Aires next Thursday.

It was a reversal of last year's final when Corinthians beat six-times champions Boca to lift South American club football's elite trophy for the first time and provided a major lift for the Argentine side, who are without a win in 12 league matches.

Riquelme surprised Corinthians with a looping shot from out on the right touch-line that went over goalkeeper Cassio to put Boca ahead at the Pacaembu in the 25th minute.

The wonder-strike came less than a minute after Corinthians were denied a goal in a controversial offside decision when Romarinho slipped between two defenders and steered the ball into Agustin Orion's net.

Television replays appeared to contradict the linesman's decision to raise his flag.

Paraguayan referee Carlos Amarilla also missed a handball inside the box early in the match by Boca right-back Leandro Marin.

Corinthians equalised early in the second half with a header by midfielder Paulinho but Riquelme's goal meant the home side needed to find the net two more times to advance, a task that proved beyond them.

"We were confident in the team... we played a good first half, we knew the second would be complicated but now we're going to celebrate," former Argentina playmaker Riquelme told Fox Sports.

"We've not been in good form but we played two great matches," holding midfielder Leandro Somoza said, referring to both legs of the first knockout round tie.

Corinthians defender Fabio Santos said: "We faced a very good team, we created goal chances, we had opportunities to fire our game but we didn't manage."

Riquelme quit Boca after their defeat to Corinthians at the Pacaembu last July and was out for seven months but returned when coach Carlos Bianchi, with whom he had shared in a string of titles almost a decade earlier, took charge again this year.

Orion kept Corinthians at bay in the final half hour, including a block from Peru striker Paolo Guerrero and a chested effort by Paulinho that the goalkeeper turned away for a corner.

Substitute Alexandre Pato also should have scored for Corinthians near the end when he skilfully brought down Guerrero's low cross at the near post but fluffed his finish.

In Buenos Aires, Newell's scored an early goal to set up a 2-1 victory over fellow Argentine side Velez Sarsfield to reach the last eight on the away goals rule.

Velez, champions in 1994, had won the first leg 1-0 in Rosario and while the aggregate score was 2-2, Newell's went through thanks to Wednesday's two goals at El Fortin.

Milton Casco struck for Newell's in the third minute and fellow striker Ignacio Scocco, top scorer in the Argentine first division, increased their lead before half-time.