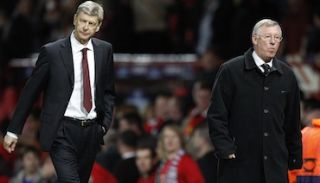 When Ferguson arrived at Old Trafford in 1986 he famously said he wanted to knock Liverpool "off their perch" as the dominant force in English football - but it took a long time to achieve it.

However, as Liverpool's star waned, United's rose and, after Arsenal, Leeds United and Blackburn Rovers took turns at the top, the balance of power in the north-west began changing.

Once United finally won the inaugural Premier League title in 1993 it was game over on the domestic front.

Liverpool, who have not topped the standings for 23 years, have watched United slowly but surely chip away at their record 18 titles until overhauling it in 2011 and moving on to 20 this year.

Although Ferguson regularly exchanged "pleasantries" with Rafa Benitez, often getting under the Spaniard's skin, the rivalry was probably at its most intense in Ferguson's first five years at United when Kenny Dalglish was desperately trying to prevent Liverpool's fall from grace.

The two Scots were united, however, after the Hillsborough stadium disaster, when Ferguson gave immediate support and did his utmost to ensure United's fans followed suit, sending a group to Anfield to pay their respects.

"As long as I live, I'll never forget Fergie's exceptional gesture," Dalglish wrote in his autobiography.

It is one of the most iconic pieces of British sporting TV footage ever seen, as Newcastle United manager Kevin Keegan lost his temper live on air with the battle for the 1996 title moving into the home straight.

"I've kept really quiet, but I'll tell you something - he went down in my estimation when he said that," an emotional Keegan ranted in reference to Ferguson's claim that teams tried harder against United.

"I'll tell you - you can tell him now, he'll be watching - we're still fighting for this title... and I'll tell you honestly, I will love it if we beat them - love it!"

Newcastle, who had been 12 points clear, fell away at the finish and United won the title by four points. Ferguson's reputation for winning "mind games" was cast in stone.

Newcastle were second again the following season but Keegan had resigned midway through the campaign and they disappeared from United's radar for good.

During the late 1990s and early 2000s the Premier League was a two-horse race between United and Arsenal and in Arsene Wenger, Ferguson had a rival who was not about to fall at his feet.

The cerebral Frenchman was certainly irritated by his opposite number but generally maintained his dignity while often the players of both sides were losing theirs in a series of high-octane clashes.

Ferguson had set the tone on Wenger's arrival at Arsenal from Japan in 1996. "They say he's an intelligent man, right? Speaks five languag