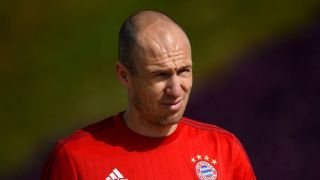 Arjen Robben is confident Bayern Munich will hit the ground running in 2016-17 despite several key players still participating at Euro 2016.

Bayern will officially start their pre-season on Monday, but they will be without the likes of Manuel Neuer, Mats Hummels, Thomas Muller and Renato Sanches, whose countries are in the last four in France.

Nevertheless, Robben has dismissed suggestions their lack of rest could have an effect on Bayern as he is confident Carlo Ancelotti's squad will be ready when the new Bundesliga season gets underway.

"We are all used to playing a lot of games, including the players who are at Euro 2016 at the moment," Robben told Bild.

"I am confident that they will all be ready once the Bundesliga kicks off.

"I do not have any fear for a potential difficult start to the season."

Bayern start their Bundesliga campaign at home against Werder Bremen on August 26.