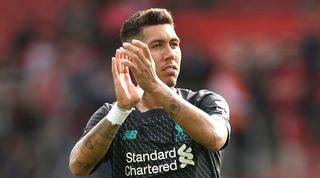 Troy Deeney believes Roberto Firmino is the best striker in the Premier League.

The Brazil international came off the bench to help Liverpool to a 3-1 victory over Newcastle on Saturday.

Firmino did not find the net against Steve Bruce's side but he was instrumental in the Reds' comeback from 1-0 down.

And Watford captain Deeney thinks there is no one better in England's top flight.

"I think he's the best No.9 in the league, personally," he told Sky Sports.

"If you're a manager you want someone who can close down the whole back four on his own, link play, come short, scores goals and he gets assists. So for me, he's the best around at the moment."

Liverpool will begin the defence of their Champions League crown against Napoli on Tuesday.