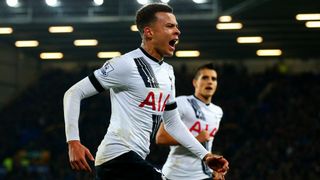 Brendan Rodgers has revealed just how close he came to making Dele Alli a Liverpool player during his time in charge at Anfield.

Alli has been a revelation this season after completing a move to Tottenham from MK Dons a year ago, holding down a starting berth and breaking into the England set-up following an impressive run of form.

Reports suggest Liverpool passed up the chance to sign Alli for £5million before his move to White Hart Lane, and Rodgers was disappointed to miss out on a deal.

"We thought we had him at Liverpool," he told Sky's Goals on Sunday.

"The manager of MK Dons [Karl Robinson] actually drove him down to us. They played a game on the Saturday and we were playing West Ham on the Sunday.

"We'd had contact with Dele, it was all above board, I was speaking with Karl Robinson and I spoke to Dele and his adoptive parents.

"Karl did really well with him and he came to me and said, 'I've got a really exciting player, I'd love to see him at Liverpool'.

"I spent a couple of hours in a hotel room with him and he wanted to come to Liverpool. It was all about getting the deal done with the club but unfortunately it never got done.

"On Saturday evening we thought it had got done but eventually he went to Tottenham, which was frustrating and disappointing. He's done really well there."

Rodgers also elaborated on his wider transfer frustrations, including missing out on Arsenal-bound Alexis Sanchez and the signing of Mario Balotelli - a player the Northern Irishman had reservations about.

"Transfers were a group decision," he added. "It was certainly not something where I would have the sole final say.

"It's difficult because you want a player in but if the player is not on the list you couldn't. We needed a player who could press at the top, because Luis Suarez gave us so much of that.

"The huge blow was that we thought we were getting Alexis Sanchez and that he'd be a like-for-like replacement in terms of how he pressed the game, his aggression. Rickie Lambert would come in and be an option if we needed something else in the game.

"But we didn't get Alexis Sanchez. I felt Mario wasn't someone who suited the profile of what we were after but, come the end of the summer, when we were struggling to get in the type of player we wanted, the ownership thought this was perhaps one I could develop."