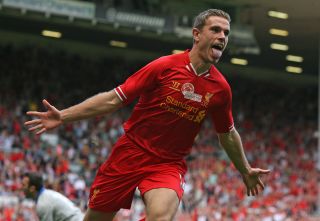 Henderson has been an ever-present in the Liverpool side that sits second in the Premier League after losing just one of their opening seven games, and has displayed his versatility by playing in several different roles.

The 23-year-old was part of Roy Hodgson’s England set-up at the 2012 UEFA European Championships, but has not featured for his country since.

However, Rodgers believes the former Sunderland man’s form so far this campaign, along with his ability to perform in a number of positions, means he should be in contention for Brazil 2014.

"I think there is a great opportunity there for Jordan," Rodgers told the Liverpool Echo.

"I look at Jordan and I think he's absolutely perfect for the World Cup squad. Firstly, in terms of the performance level he has shown so far this season.

"But also because when you go to a World Cup you are taking a squad with you. You need players who are going to be flexible and can play well in a number of positions and I am sure Roy Hodgson knows that.

"We have seen it already this season when he has played as a wing-back, as a wide midfield player in a 4-2-3-1 and as a central midfield player. Jordan plays all those positions really well."

Rodgers went on to say that he envisages Henderson playing in a central role in the future, adding: "He's a player I’ve been really impressed with and above many others he should be in that squad."