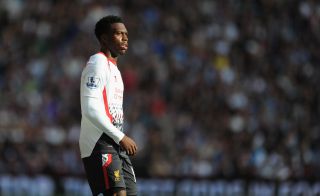 The 23-year-old grabbed the only goal in a 1-0 Premier League win for the second consecutive week on Saturday, as the Merseyside club extended their 100 per cent record with a victory over Aston Villa.

Sturridge has now scored 12 goals in 16 top-flight appearances for Liverpool since ending a frustrating spell at Chelsea in order to make a £12million move to Anfield in January.

And Rodgers believes the Manchester City academy graduate can now prove to be a big asset for national team boss Roy Hodgson.

"There is absolutely no question he is potentially the top English striker," he said.

"He has got all the tools to be that. You look at him and people would think he is maybe a Brazilian striker, with his body physique and pace and power.

"England are fortunate to have him because he is a big talent – see his movement, his touch. If he continues and keeps his fitness, he would be a big threat for any team.

"He has got the England captain (Steven Gerrard) behind him, advising him and guiding him. He’s a number nine, he can move, he can sprint, he is a really good footballer as well, he is not just a goalscorer.

"But he knows he needs to be consistent, he needs to get himself the games and the goals.

"He’s never going to have a better platform and he has the confidence of a manager who has always believed in him. He’s not used to playing. But we just said to him: ‘You need to throw the dice, get out on the training field every day, work your socks off and everything else will take care of itself'."

The Northern Irishman also expressed his belief that Sturridge has always been a capable forward, but was unfortunate not to be given regular chances by Manchester City and Chelsea.

"He’s been here since January and strikers are judged on goals in games, and if you judge him on that his record is very good," Rodgers added. "He is a player that thrives on confidence.

"He was at a great club at Manchester City, and he was about to get his chance when all the money came into the club.

"So he made the move to Chelsea thinking maybe he was going to get more opportunities. But there was Didier Drogba, senior players in front of him, so he never really got the chance, and then when he did play it was probably more in a wide area."