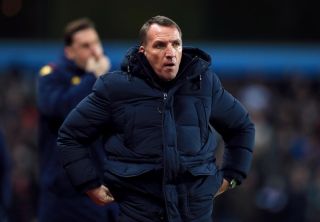 Leicester boss Brendan Rodgers has urged his players to use the pain of their league cup defeat as a motivating force to drive them on to victory over Chelsea.

The Foxes suffered dramatic heartbreak at Aston Villa on Tuesday night when they were beaten by a 95th-minute winner in the second leg of their Carabao Cup semi-final, losing 2-1 on the night, and 3-2 on aggregate.

Although the effects of such a loss will be draining on Rodgers’ squad, he has called on them “to use that failure to help us succeed going forward” ahead of facing the Blues at the King Power Stadium on Saturday.

Rodgers said: “That’s what you’re hoping for because when you’ve been so close to a final, and then not getting there, it gives you that determination and it builds resilience.

“And building resilience individually and as a collective isn’t always about winning. It’s about going through, not just the good times and winning the big games, but also the hurt because that gives you that extra determination and desire to push on and to win.

“So when you have nights like the other night when it doesn’t quite go for you, then it hurts, and you have to use that, and that’s something we aim to do going forward.”

City remain firmly in control of their own destiny when it comes to securing Champions League football for next season as Rodgers’ third-placed side sit 14 points clear of fifth-placed Manchester United.

But after losing to Liverpool and Manchester City either side of Christmas last month, they face a further stern examination of their top-four credentials against a Chelsea side who sit one place and eight points below them.

Rodgers has also failed to beat Chelsea in his last 13 attempts as a manager.

He said: “We’ve come close a few times. Every record, every stat is there to be broken, so we’ll look to that at the weekend.

“We know it’s a tough game. They’re an outstanding side with good players but, for me, it’s never been a personal thing, it’s about trying to get the result at the weekend.”

Rodgers, though, has the utmost respect for what manager Frank Lampard has achieved in his first season in charge of the club.

“Frank’s done a fantastic job there,” said Rodgers. “He took over a really good squad in the Champions League, that had won the Europa League, but had lost their best player (Eden Hazard) so he was going to have to come in and galvanise them.

“Everyone talks about the ban on buying players and that Frank was forced to play young players, but that wasn’t the case at all.

“I’m pleased he’s done well, he’s a good guy, he’s very thoughtful, he knows what he wants from his teams and he’s been able to do it at a club he loves.”