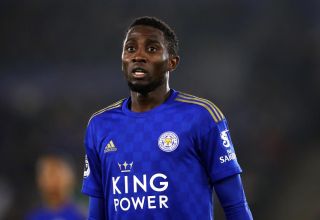 Leicester boss Brendan Rodgers is confident the winter break will give Wilfred Ndidi the time required to overcome his latest knee injury.

Ndidi made a remarkable recovery last month following surgery to remove a piece of floating bone from the meniscus, returning to action just 12 days after the operation.

But after coming on as a 34th-minute substitute in City’s 4-1 Premier League win over West Ham on January 22, and then playing the full 90 minutes of his side’s Carabao Cup semi-final second-leg defeat at Aston Villa six days later, Ndidi was pulled out of Saturday’s 2-2 home draw with Chelsea.

With the Foxes not in action now until the Valentine’s Day clash with Wolves, Rodgers is hopeful the 23-year-old Nigerian will be able to play at Molineux.

Explaining the situation, Rodgers told Leicester’s website: “We just thought it was too big a risk really.

“He was down to play, even right up until the team-sheet going in, well before the game, but gradually he felt the pain.

“I can just tell. I’ve known Wilf long enough now. He’s a real warrior and a tough player, so to see him in the pain when he walked, it just made no sense to risk him.

“We took it out of his hands, let him rest. He’s got a period of rest now, which will help his knee.”