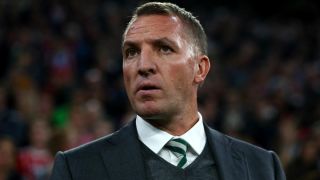 Brendan Rodgers admitted Bayern Munich's individual class simply proved too much for Celtic to handle in their 3-0 Champions League defeat at the Allianz Arena.

Scottish champions Celtic struggled to lay a glove on their star-studded opponents as the hosts cruised to their second win in Group B on Wednesday.

While believing Celtic could have done better to prevent the goals – all three of which came from crosses – Rodgers was open in his assessment of the gulf in quality between the two sides.

"We have to respect where we are at as a club in terms of the level of player we are playing against," Rodgers told BT Sport.

"We are limited in terms of our options in defence. The guys gave an honest performance so I was happy enough with that.

"We always have to go into every game believing we can get a result, so when we play them next time around we will be at home in front of a great crowd.

"We hope we can do better in terms of dealing with crosses and then look to create chances and hopefully take those chances."

Celtic captain Scott Brown was similarly hopeful of forcing a different result when the two teams meet at Celtic Park in just under a fortnight.

"We could have done better with the goals we conceded but they are a top-quality side," Brown said.

"Hopefully our fans can give them a fright and we can cause them some problems."