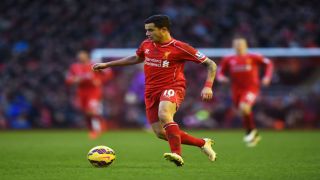 Brazilian playmaker Coutinho showed great vision to set up goals for Raheem Sterling and Daniel Sturridge in a 2-0 Premier League triumph at Anfield.

While Liverpool have failed to hit the heights of last season in this campaign, Coutinho has been a standout performer and his contribution has not gone unnoticed by Rodgers.

He told the club's official website: "He has been at a really top level of performance over the last couple of months.

"His pass for the first goal was sublime; he was half looking the other way and lifts it over the defender. He has got a lovely weight of pass.

"He needs players to run beyond and that was our problem at the beginning of the season, we had no penetration. We have moved it and put Raheem through the middle, and for guys like Phil it has a knock-on effect - he can then play passes through.

"I thought Adam Lallana, Raheem and Phil, in the creative side of our game, were outstanding. It was great to see young Jordon Ibe when he came on, offering a great threat of pace and power on the side, and Alberto Moreno going forward.

"Offensively we were very good, but very compact and defensively solid against a good side."

The win saw Liverpool move above West Ham into seventh, four points off the top four.