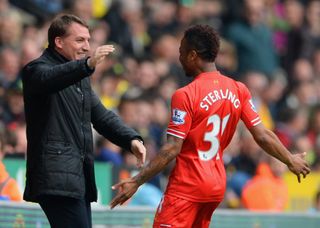 Sterling was again outstanding in Liverpool's 3-2 win at Norwich City on Sunday, with the teenager scoring twice and setting up Luis Suarez's 30th goal of the season with a sublime pass to move the Merseyside club five points clear at the top of the Premier League.

The England international has been a key part of Liverpool's club-record run of 11 straight top-flight victories, and now has nine league goals to his name this term.

Sterling opened the scoring in last weekend's crucial 3-2 success over Manchester City, and repeated the trick at Carrow Road with a 25-yard thunderbolt after just four minutes.

And Rodgers has heaped praise on the 19-year-old, who he feels fully deserves the PFA Young Player of the Year award, for which he was nominated earlier this week.

"I think he's arguably the best young player in European football at the moment," said the Northern Irishman.

"I've been really, really pleased with his maturity. He puts an awful lot of time into his work - we've tried to play him in different positions to improve his football intelligence.

"And you can see today how he operated at the top of a diamond, penetrating, being comfortable on the ball.

"When we switched to 4-3-3, he was the player who went wide, so it really shows you how intelligent he is as a footballer. He's got that in-built brain and belief that he can be a good player.

"He's a really humble kid - it's been great to see.

"His first goal was fantastic. The second, he breaks away at speed and he got a bit of luck with the finish but every manager and coach will tell you: 'Hit the target.'

"And his ball for Suarez's goal - that was (the pass of) a top midfield player."