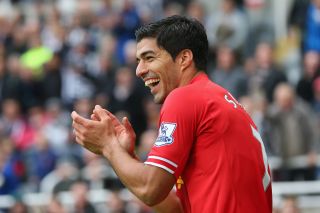 The Uruguayan was at the centre of constant transfer speculation during the off-season, with the English Premier League club refusing to sell him.

Captain Steven Gerrard told the Liverpool Echo he was worried the 26-year-old forward may leave the club if they failed to qualify for the UEFA Champions League.

Despite the speculation, Rodgers said he had never seen Suarez, who has scored six league goals this season, happier at the club.

"Luis, looking and speaking to him over the last couple of days, he's happy as he's ever been," Rodgers said on Thursday.

"He recognises that we have a real genuine chance this year of breaking in there (the top four). Last year was about transition and the second part of the season was about improvement, he's seen that.

"Obviously we had a difficult summer but he's come back and is more mature and his performance level's been really high and he sees a genuine chance for us to make that so he's very happy here."

Despite losing to league leaders Arsenal last time out, Liverpool sit third in the Premier League after a solid start to the campaign.

Liverpool's form has Rodgers confident they can qualify for Europe's top club competition, which could be enough to keep Suarez at Anfield.

"If you look at where we're at, if you're averaging two points in your games then you would like to think that you're getting into the Champions League," Rodgers said.

"Certainly that's something come Saturday (against Fulham) if we can do that, get another three points, which we'll be fighting hard for, then that would take us above that.

"We're just treating every game as a really important game for us in our quest this year, as I said we need to just keep focusing and keep our concentration."

Rodgers is likely to welcome back defender Glen Johnson and attacker Philippe Coutinho to the starting line-up for the visit of Fulham.