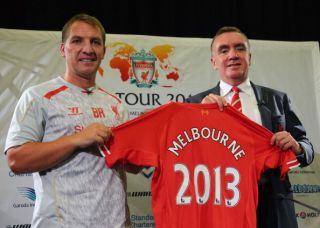 Suarez, who was given additional leave by the Reds after playing at the Confederations Cup last month, touched down in Melbourne on Sunday.

The rest of the Liverpool squad arrived several hours later from Jakarta, where they began their pre-season tour with a 2-0 win over an Indonesia XI on Saturday.

Suarez made his desire to leave Liverpool public last month with Arsenal and Real Madrid both interested in the Uruguayan's services.

But Rodgers said he was unfazed by the speculation surrounding Suarez, having been in regular contact with the controversial forward during his time away from the club.

"As we've always been as a club, I'm quite relaxed about it," he told reporters in Melbourne on Monday.

"We'll chat to him at some stage, like we do with all the players.

"But he's back, he's in great spirits and he's obviously an integral part of the group.

"You could see his closeness with his team-mates last night when they were all seeing him for the first time in a number of weeks.

"He'll join training today with all the other players and over the course of these next few weeks we'll communicate.

"The reality is that he's a player who is very much valued at Liverpool and unless there's any sort of offer that comes in that is anywhere near his value, there's nothing to consider, and we haven't had that."

Rodgers said both Suarez and captain Steven Gerrard were expected to feature against A-League side Victory in front of a sell-out crowd at the MCG on Wednesday.

"The players aren't quite up to 90 minutes yet," Rodgers said.

"For the game in Indonesia we played a team for around 60 minutes and then we looked to make changes.

"The players are only three weeks into their preparations but they'll all be involved; they'll all have some part to play."

More than 95,000 fans are expected to fill the MCG in what is set to be the biggest crowd the English giants have ever played in front of.

"We're very honoured to be playing at such an iconic sporting venue," Rodgers said.

"It's a great honour to play there and to be sold out is remarkable really but it doesn't surprise me because the support for this football club really is worldwide."