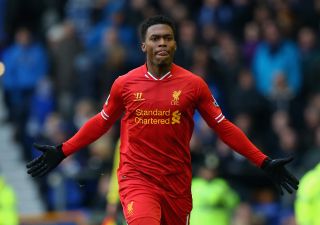 Sturridge, who had been sidelined for around six weeks with an ankle injury, made a goalscoring return in the 5-3 win over Stoke City last Sunday, taking his tally for the season to 12 in all competitions.

The England international has formed a lethal partnership with Luis Suarez, the Premier League's top goalscorer, and Rodgers has backed Sturridge to join his Uruguayan team-mate in being considered as one of the game's great players.

"My opinion on Daniel has only been reinforced through the time that I have worked with him," Rodgers said. "Overall I think he's got a wonderful opportunity over the next couple of years of being world-class.

"He has every tool, he has every quality to be a world-class striker, similar to what Luis Suarez is. If we get him onto the field on a regular basis, if he gets a bit of luck and stays clear of injury, then he can be (world-class) for sure.

"This period out with injury has refreshed him mentally. He comes back in the second part of the season now in a real good moment.

"I think it really signified how hard he worked in his injury period when he came into the game at the weekend.

"He made an immediate impact, physically he looked very strong and mobile and fast in his reactions. That's a great credit to him and how focused he's been on getting back."

Rodgers also revealed that he was looking at options to strengthen his squad in the January transfer window, but admitted there had been "no real developments".

"We've been working over a number of months on possibilities that could strengthen the team," the Northern Irishman added. "We just need to wait and see how that goes in the next couple of weeks."

He went on to say that youngsters Tiago Llori and Jordon Ibe could be sent out on loan to get first-team opportunities, though in the latter's case Rodgers is in no rush to set up a deal.

Liverpool welcome Aston Villa to Anfield on Saturday as the Merseysiders look to build on an excellent home record that has seen them take 27 points from 10 games this term.