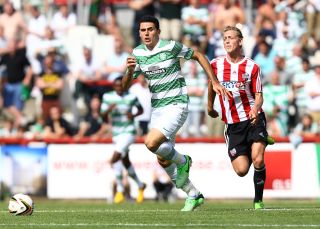 New Vegalta coach Graham Arnold, Rogic's former mentor at A-League side Central Coast Mariners, had wanted to rescue the promising 21-year-old from what has proved to be a frustrating spell at the Scottish Premiership title-holders.

But Arnold was unable to convince his new employers of the worth of bringing in the playmaker on a short-term basis.

News of the collapsed move has sparked rumours of a return to the A-League for the eight-cap Socceroo, with The World Game reporting that Sydney FC are interested in his services.

A potential swoop from Melbourne Victory has also been mooted in some quarters, with the club battling to retain attacking midfielder Mitch Nichols in the face of interest from Cerezo Osaka.

Victory may yet be able to retain Nichols, with Cerezo believed to also be interested in Uruguayan centre-forward Diego Forlan.

Rogic, meanwhile, has made just three first-team appearances for Celtic this season, casting doubt on his hopes of a berth in Ange Postecoglou's Australia squad for the World Cup in Brazil later this year.