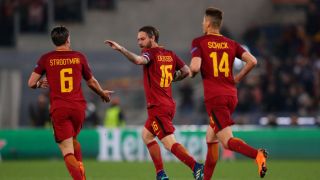 Daniele De Rossi celebrated Roma's dramatic Champions League quarter-final victory over Barcelona, but insisted his side are not done in the competition yet.

The Giallorossi overturned a 4-1 first-leg deficit with a deserved 3-0 win at the Stadio Olimpico as Edin Dzeko, captain De Rossi and Kostas Manolas found the net to dump Barca out via the away goals rule.

And while De Rossi described the triumph as one of the best of his career, he says Roma must now believe they can go on and provide further shocks in the last four.

"For a team like Roma, it's truly incredible," he told Mediaset Premium.

"Now we have to take another step - not think we're in the semi-final and have already achieved the maximum. I don't believe that we have.

"But this is certainly one of the happiest days of my Roma career. I was almost moved seeing the fans before the game. I told my team-mates: if they believe, we can do the same."

De Rossi took positives from the first game at Camp Nou as Roma worried Barcelona, noting that Ernesto Valverde's side are no longer the all-conquering outfit they once were.

"We knew it would be difficult, but we had that little bit of belief," he said. "The first leg showed us Barcelona had a lot of quality, but not as much as a few years ago.

"We scored two own goals, there were some dubious situations and we knew the gap wasn't 4-1.

"It was a long way from that to winning 3-0 and not conceding at home, but all credit to the coach. He invented this formation two days ago, drilled it into our heads and it worked wonders."