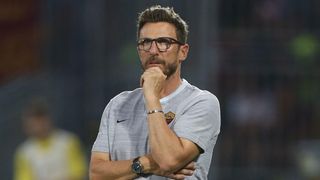 Eusebio Di Francesco has shrugged aside Roma's inability to land Bordeaux winger Malcom, who opted instead to sign for Barcelona in a dramatic late twist.

The Giallorossi had agreed a €40million fee with Bordeaux for the 21-year-old, who was reportedly set to fly into the Italian capital earlier this week to finalise personal terms.

But it soon emerged that Barca were interested in hijacking the deal, Malcom deciding on a move to Camp Nou, where he signed a five-year contract after the two clubs settled on a price of €41m.

Malcom described the switch as "a dream" and although Roma sporting director Monchi indicated the club would consider legal action, Di Francesco seemed unperturbed by the developments.

"You'd have to ask Monchi about it," he told Sky Sport Italia.

"I'm not bitter, I'm sorry for how things went but if someone is to arrive then an even stronger player will come."