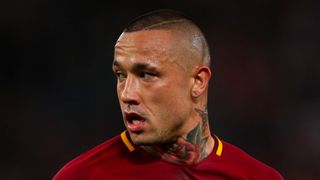 Radja Nainggolan's sale to Inter was "a shared choice" according to Roma head coach Eusebio Di Francesco, who expects more signings at Stadio Olimpico before the start of the new season.

Roma sporting director Monchi was the target of supporters' ire after the Belgian favourite departed the club to join their Serie A rivals, with Davide Santon and Nicolo Zaniolo moving in the opposite direction as part of the deal.

But Di Francesco insists the decision to let Nainggolan go was not made above his head.

"A shared choice was made," Di Francesco told Il Centro.

"I have a very good relationship with Radja and we spoke recently. On a personal level I wish him all the best.

"As for the transfer campaign, it's not yet finished, although our sporting director Monchi has got on with his work. He moved with speed.

"We may need to thin out the squad, we're making assessments and we'll make others during pre-season."

Pastore arrived on a five-year contract in a €24.7million transfer from Paris Saint-Germain, and his new coach says he has been brought in to play as an outside midfielder.

"He's one of the few new players who I've spoken to and he gave me positive feelings," Di Francesco said of Pastore.

"His versatility is important for the tactical makeup of the squad. He has characteristics which we didn't have before.

"He has the quality and imagination to make us more penetrative, especially against teams that sit back."

Roma finished third in Serie A, behind Juventus and Napoli, in 2017-18 and Di Francesco said a stronger team ethic would be crucial to his side making a challenge for the Scudetto in the coming campaign.

"We want to be there too," he said. "We want to cause problems for those who finished above us in the table.

"At Juventus there's teamwork and that's what I'm preaching at Roma. We need to take care of 'us' rather than 'me'."