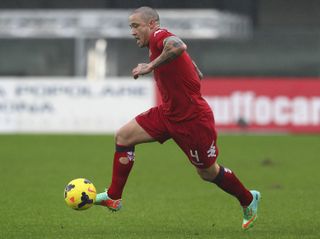 The capital club will pay €3million for the temporary switch and have reserved the right to purchase the Belgium international for €6m at the end of the Serie A campaign.

Should the permanent move go through, Nainggolan has agreed a contract at the Stadio Olimpico that will run until June 2018.

The 25-year-old signed for Cagliari, initially on loan, from Piacenza in January 2010 and went on to make 137 appearances for the Sardinian club, scoring seven times.

His combative box-to-box style has drawn many plaudits and resulted in international recognition in the shape of four Belgium caps, although he is yet to have established himself fully in Marc Wilmots' plans.

A switch to title-chasing Roma could boost his chances ahead of the FIFA World Cup in Brazil, although he faces stiff competition from the likes of Marouane Fellaini, Mousa Dembele and Axel Witsel for a spot in his country's side.

Nainggolan's arrival will come as a boost for Roma, after they lost Sunday's crucial top-of-the-table clash with Juventus 3-0 - their first defeat of the season, leaving them eight points off the Turin club.

Cagliari sporting director, Nicola Salerno, gave his blessing to the move and also backed the midfielder to be a hit in Rudi Garcia's set-up.

Salerno told Tele Radio Stereo: "He is going to a top club with a great team.

"Radja has the qualities to do well.

"How would I describe Nainggolan? He is a player that can do well anywhere."

Nainggolan could make his Roma debut when they host Genoa on Sunday.