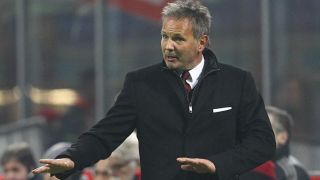 Roma host AC Milan on Saturday in a game which could prove decisive in the futures of both Rudi Garcia and Sinisa Mihajlovic.

Milan appeared to have turned a corner under the former Inter defender towards the end of last year, winning four and drawing two of the final six matches of 2015 to put them firmly back in the race for Serie A's top three and keep their Coppa Italia hopes alive.

But a shock home defeat to Bologna on Wednesday has piled pressure back onto Mihajlovic, with reports in Italy suggesting president Silvio Berlusconi has given him the next two matches to prove his worth.

Mihajlovic was defiant after that loss to Roberto Donadoni's side, insisting he would not resign, and is determined to make a statement with an imposing performance at the Stadio Olimipco – despite them having won just once on their last 10 visits.

"We need to be more ruthless in attack and not lose heart," he told Milan Channel. "We have the chance to get back on track at Roma in a few days' time. We will try and impose our game and as always go for the win."

For Roma, victory is almost essential if they are to keep pace with the leading pack in Serie A and buy more time for under-fire Garcia.

Just one win in nine matches prior to the mid-season break – a run which included a 6-1 hammering by Barcelona and a shock Coppa Italia exit to Spezia – left Garcia fending off the critics and a 3-3 draw with Chievo in which they twice surrendered the lead has created further scrutiny.

Edin Dzeko – who will miss the game after his three-match suspension was upheld – insists that they will not abandon their Scudetto hopes, however.

"The guys gave everything and fought until the last minute," he said of the Chievo result. "Sometimes you have to take a point. We have the next game at home and will try to win.

"No, I wouldn't say that [the Scudetto is over]. There are still 18 games to play, so there are a lot of points up for grabs."

Roma were at least given a boost by the news that Mohamed Salah has escaped damage to his hip flexor muscle, after he had to be withdrawn against Chievo.

Daniele De Rossi (ankle), Seydou Keita (calf), Kevin Strootman (knee) and Salih Ucan (foot) are all set to miss the match, however, with doubts still lingering over the fitness of Francesco Totti.

Milan will still be without Jeremy Menez (hip), Diego Lopez (knee) and Mario Balotelli (groin), but Kevin-Prince Boateng is in line to make his first appearance since rejoining the club after shaking off an illness.