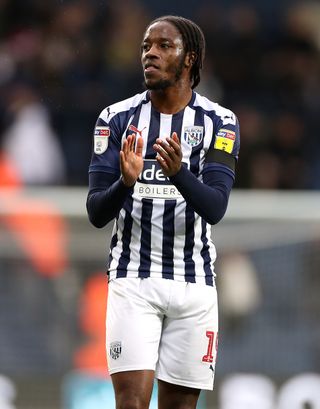 Romaine Sawyers wants his rise to the Premier League to leave a “legacy”.

The thoughtful West Brom midfielder is acutely aware what his story could mean to the next generation.

A key man in Albion’s return to the Premier League, promotion capped a glorious comeback to his boyhood club.

He was released by the Baggies in 2013 and dropped to League One with Walsall, spending three years at the Banks’s Stadium before joining Brentford.

Three more years at Griffin Park helped Sawyers grow and he returned to The Hawthorns last summer after seven years away.

It had been a long time coming and, while he is not the type to shout from the rooftops, it is a journey Sawyers wants others to find inspiration from.

“We can’t all be Rooneys, it would be great to be Steven Gerrard, Frank Lampard or Wayne Rooney because they are exceptional talents,” the St Kitts and Nevis international told the PA news agency.

“But there will be more Adam Lallanas and Jamie Vardys and I can now be used as an example.

“Vardy was a late bloomer and they are a real inspiration for you to try and take the next step.

.@WBA midfielder @RomaineSawyers has been involved in 814 open play sequences in the #SkyBetChampionship this season – more than any other player.#EFL | #WBApic.twitter.com/01ShsD8pt3— Sky Bet Championship (@SkyBetChamp) November 23, 2019

“It’s good motivation for the so-called next me. Not in terms of my playing style but the kid who is at a club and has to go down the leagues.

“I could be an example now I’ve reached the Premier League. In five years time someone might say ‘remember Romaine, he was at West Brom but then went to Walsall and Brentford before going back and getting promoted’.

“I spoke to the boys who didn’t get a new deal this year and said ‘I’ve done it, you can do it but do it better’. It’s a legacy which can be left behind.

“Although I would be lying if I said I knew it was going to come. I knew the things I’d have to do, work hard and showcase my talent, to get back there.

“I didn’t know if it was ever going to come but no footballer can say they didn’t dream of it when they were a kid.

“It took me back to being a kid when promotion was confirmed. As you get older dreams become targets, it’s a reality.”

Yet the dream so nearly turned into a nightmare as the Baggies limped across the line to finish second, 10 points behind champions Leeds.

A failure to win any of their final four games saw Brentford close the gap to a point but a nervy final day 2-2 draw against QPR secured promotion.

Albion are favourites for an instant return, the reasoning being obvious, but it was the same this time last year for Sheffield United – who Sawyers describes as an “eye opener” – before they finished ninth.

“It’s easier said than done but you have to have that mentality. We’ve got that in the group, we’re not just there for the ride.

“This year we were expected to beat most teams, we had a Premier League manager (Slaven Bilic) in charge of a Championship team.

“But we also had Premier League talent in Jake Livermore, Charlie Austin, Grady (Diangana) and Matheus (Pereira) had a fantastic season.

“Now we have done it people feel we can hold our own in the Premier League but it’s about going and doing it.

“Next year we’re not expected to lose every game but you have to pinpoint what games to take points from.”

Promotion has restored the pride at The Hawthorns, in stark contrast to when they tumbled out of the top flight during a chaotic 2017-18 season.

A squad trip to Barcelona also ended in embarrassment with a stolen taxi and public apologies from Livermore, Gareth Barry, Jonny Evans and Boaz Myhill.

But Albion have repaired their reputation and boyhood Baggies fan Sawyers knows how important it is.

“We’re fortunate in our job but for the people around the club promotion is life-changing. Whether it’s morally, financially or whether it’s just bragging rights,” says the 28-year-old.

“It lifts the whole community and most people who work in clubs are from the community. Our canteen lady, she’s from the area and she can now walk around and say she’s with the Premier League boys.”