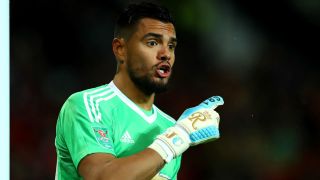 Sergio Romero has vowed to honour his contract at Manchester United, despite making only seven league appearances for the club in three years, and indicated an extension may be on the table.

The Argentine goalkeeper is in the process of recovering from a knee injury in the hope of being fit to play for his country at the World Cup in Russia and took time out from his rehabilitation to ponder his future at domestic level.

The 31-year-old signed a contract in July 2017 that would keep him at United until 2021, but told TyC Sports that manager Jose Mourinho wants to keep him at the club even longer.

"I'm staying at Manchester United for now," said Romero. "Mourinho worked hard for my renewal. I can't let go of his hand.

"If United wants to sell me, if they have an offer that it's useful for the club, they will sell me. But I don't think that would happen."

Romero is one of three goalkeepers in the Argentina squad, along with Chelsea's Willy Caballero and Franco Armani of River Plate, and insisted he would be ready for selection for Jorge Sampaoli's side before the end of the World Cup group stage.

"I spoke with Jorge [Sampaoli]. I explained the situation and recovery times," said Romero.

"I told him that I didn't have anything broken. I assured him that I would be available in 10 days."