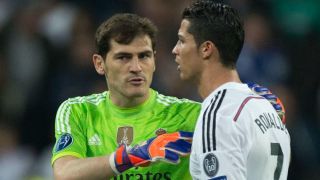 Iker Casillas believes Cristiano Ronaldo's latest Real Madrid contract extension is important because it shows that he is still depended on.

Ronaldo is now tied to the club until 2021 and he is even targeting another few years on top of that after initially joining from Manchester United in 2009.

There had been rumours about his future beforehand, with the signing of Gareth Bale's bumper new deal reportedly signalling the club's shift of focus from Ronaldo to Bale.

But Casillas, a team-mate of Ronaldo's for six years until his 2015 departure to Porto, has firsthand experience of how important the Portugal star is and is hopeful he can continue at his current level.

"He's a fantastic player who has given much for Real Madrid," Casillas told Europa Press.

"It [the contract extension] is clearly going to win over the fans and now he knows he is still depended on.

"The level of demand will be higher and they [the fans] will be who will put the limits [to expectations], so hopefully Ronaldo will continue for a long time."

Casillas went on to discuss Real's derby clash at Atletico Madrid on Saturday and, while he is hopeful of an away win, he is wary of Diego Simeone's men, who need to make a dent in the six-point gap that separates the two teams.

"But if they win it decreases the points to the leaders who are Real Madrid."