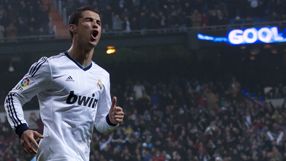 The Portugal forward has deflected attention away from his embattled compatriot with outstanding displays, scoring twice against Real Sociedad in La Liga on Sunday and a hat-trick in the King's Cup against Celta Vigo on Wednesday.

Real's top scorer, with 174 goals from 172 appearances and the runner up to Lionel Messi in Monday's World Player of the Year awards, is, however, suspended for their next game away at Osasuna in La Liga on Saturday.

"I have to ask that they [the fans] stop this now," Ronaldo told reporters after their 5-2 aggregate victory set up a cup quarter-final with Valencia.

"The boss is going to stay, we still have a lot we can win this year. He is in charge and he takes the decisions, the fans and the players should help him.

"People have shown they are unhappy but that's enough now. They have to get behind the boss and the team. It affects the players out on the pitch. If we win the Cup and the Champions League it will have been a good year."

Real have struggled to replicate the dynamic attacking football that won them the league title in record-breaking style last season and they have slipped 16 points behind arch-rivals and leaders Barcelona in the standings.

The inconsistent performances combined with Mourinho's confrontational style, hints that he may leave, and the recent decision to drop captain and fan-favourite Iker Casillas have alienated sections of Madrid's more traditional supporter base.

The last two home games have resembled plebiscites with huge cheers for Casillas when his name was read out on the team-sheet before kick-off, while Mourinho's has been met with a mixture of jeers, whistles and applause.

Ronaldo has also had to win his own personal battle to convince home fans, who have whistled him in the past despite his prolific scoring record.

The 27-year-old has cut down on the petulant histrionics on the pitch this season and comports himself much more like the leader of the team - a change in approach from which Mourinho could take note.

"I have felt the support of the Bernabeu for some time now and it makes me happy," Ronaldo added. "If the fans are with me, it motivates me."

He was also asked about interest from big-spending Paris Saint-Germain and speculation over possible contract renewal negotiations with Real. His current deal runs until 2015.

"I have a contract and I am happy here but as you say, anything is possible in the world of football," he said.

Real have only won once in their last four league visits to Osasuna's compact stadium in Pamplona, but cannot afford any more slip ups as they try to cut the gap on the unbeaten leaders Barca, who have to visit fourth-placed Malaga on Sunday.

Malaga upset third-placed Real 3-2 at the Rosaleda just before the mid-season break last month and provide Barca with one of their sternest tests yet.

Second-placed Atletico Madrid, 11 points behind Barca and five ahead of Real, defend