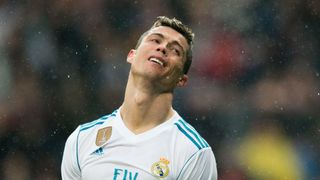 Cristiano Ronaldo must focus on breaking out of his goalscoring slump, says Real Madrid coach Zinedine Zidane, as rumours of the Portuguese's Santiago Bernabeu exit persist.

Ronaldo has scored just four goals in 14 league games this season and Los Blancos are a whopping 19 points adrift of table-topping Barcelona in LaLiga after losing 1-0 at home to Villarreal on Saturday.

Madrid have been linked in recent weeks with a move for Paris Saint-German star - and former Barcelona man - Neymar, with Ronaldo mentioned as a potential makeweight, or the one to make way to secure a deal.

However, Zidane brushed off such speculation when he faced the media ahead of Madrid's Copa del Rey first-leg clash with Leganes.

"We know that people can talk and debate outside of the club, but we think Cristiano must just think about playing, as he has always done," Zidane said.

"And I just want to talk about this, what he can bring to the team, that's all.

"I cannot imagine Cristiano going anywhere else. He is at his club, where he should be. Everyone loves him here.

"I do not want to talk about his contract. What I am most interested in is matters on the pitch, that is what I talk to Cristiano about. Everything else he manages himself, it is not my business.

"When I had difficult moments as a player I just kept working hard and thinking the team would do good things soon."