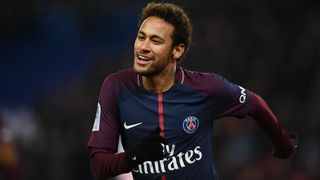 Neymar made a world-record €222million move from Barcelona to PSG last year, signing a deal until 2022 with the Ligue 1 giants.

Despite that contract, the 26-year-old continues to be linked with a shock switch to the Santiago Bernabeu.

Ronaldo, who spent more than four seasons at Madrid, said his former club were always looking to sign the best, and that included Neymar.

"Neymar is a superb player, maybe he will be the best in the world in a few years, and Real Madrid need the best," he said on Wednesday, via Marca.

Despite the speculation, Ronaldo played down how close a potential Madrid move was for Neymar.

The two-time World Cup winner believes Madrid, who are fourth in La Liga and 19 points behind Barcelona, feels his former side could perhaps win a third straight Champions League despite their struggles this campaign.

"I haven't heard any official representative of Real Madrid say anything about Neymar," Ronaldo said.

"They should think about what they have and this year it's difficult for Madrid, they have to keep going and end well.

"The Champions League is a competition that they do well in and we will see how it ends, because everything changes very quickly in football."