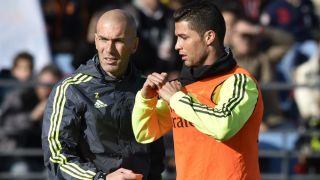 Cristiano Ronaldo says he gets on better with Zinedine Zidane than with Real Madrid predecessor Rafael Benitez.

Benitez's ill-fated tenure in charge at the Santiago Bernabeu was marred by speculation that senior dressing-room figures, including Ronaldo, had lost patience with his methods.

Zidane replaced the sacked former Napoli boss earlier this month and has overseen 5-0 and 5-1 victories against Deportivo La Coruna and Sporting Gijon so far, and Ronaldo says there is a notable lift within the squad under the Frenchman.

He also stated it was "normal" to hear that Zidane is keen to see him stay at Madrid in the long term.

"I can see a change for the better in the team with the arrival of Zidane," he told the media after Sunday's win over Sporting. "Zidane and Benitez wanted the best for the club. I have more sympathy for Zizou, don't ask me why.

"Zidane has brought a change of spirit in the team. I was doing my work independently from the coach [under Benitez]. I had no problem although we have more empathy with Zizou.

"I see things of Carlo Ancelotti in Zidane. He's a serious person at work and outside he's fun. It's normal that he wants me to stay."

Ronaldo went on to dismiss further talk of a spat with Barcelona defender Dani Alves.

The Brazilian is believed to have irked Ronaldo with critical comments after Barca's Clasico victory earlier this season and stated his surprise this week that Neymar did not finish ahead of the former Manchester United man in the Ballon d'Or voting.