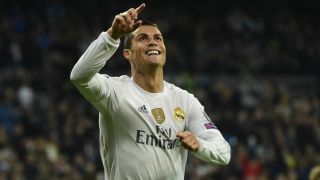 Ronaldo has remained typically prolific this season, with 27 goals in as many games for Madrid, although 16 of those strikes have come against three teams - Espanyol (five goals), Malmo (six goals in two games) and Shakhtar Donetsk (five in two) - leading to questions over the 30-year-old's influence in the team's wider success.

A return to Old Trafford or a switch to cash-rich PSG have been mooted, with Ronaldo's contract at the Santiago Bernabeu expiring next year, while he has previously hinted at a future move to MLS.

Madrid may be reluctant to let go of the attacker because of the transfer ban imposed on them by FIFA, preventing them from making any new signings in the next two complete transfer windows, but Futre nonetheless expects his compatriot to be on the move.

"I believe that the past few months have been a bit strange for Cristiano," Futre was quoted by Marca.

"It has been disheartening times for him. He has not been getting the affection he needs, although things are slightly better now following the arrival of Zinedine Zidane.

"The big question is whether he will stay with Madrid or leave for PSG or Manchester United and I believe he will leave. I think a lot of things will have to change in order to convince him to stay.

"It is the last opportunity for him and Jorge Mendes to negotiate a big contract somewhere in Europe.

"I think Madrid will have to either win a major title like the Champions League or La Liga, or risk losing Cristiano at the end of the season."