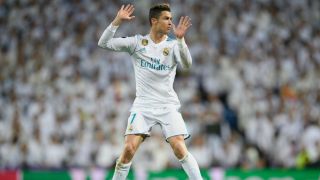 Cristiano Ronaldo signing for Juventus does not necessarily mean Inter cannot win Serie A, according to head coach Luciano Spalletti.

Juve's chances of winning the Serie A title for the eighth year in a row appear to have been boosted by Ronaldo's €112million arrival from Real Madrid.

But although the Serie A champions have smashed their transfer record to sign the Portugal superstar on a four-year deal, Spalletti is unconcerned.

"He will give strength and visibility to our championship that was once the best in the world," Spalletti told reporters of Ronaldo.

"Our aim is to be on the heels of the strongest teams. We want to compete with the best sides. I wonder why we can't do well this year, nobody can make us feel inferior.

"There's a strong sense of belonging from everybody. We have a special appeal. Great players want to be a part of our team and that's something that makes us proud of the work we've done."

Inter have also made eye-catching new signings, bringing in Radja Nainggolan from Roma and Stefan de Vrij from Lazio.

"De Vrij has international experience and can do things with the ball straight after winning it back," Spalletti said.

"Radja is very easy to read. What you see is what you get with him and that's important for us. He has done well at every team he's been at. He's something special and I'm sure he wants to show the Inter fans what he's made of.

"Lautaro [Martinez] is showing that he's a strong player, he's already mature for his age. He has a strong character, he's tough. Matteo Politano dribbles well and is quick with the ball at his feet."

| : "Last year, we suffered but we showed an extremely strong mentality. We responded in the right way and this makes me think that we're solid as a team."  July 13, 2018

Spalletti's contract situation remains up in the air but, despite entering the final year of his Inter deal, he is not worried about agreeing fresh terms.

"My contract is not an issue. We can even sort it in five minutes after training," Spalletti said. "I feel good here. We're serious people and we just want to work in the right way which is what the Inter fans deserve."