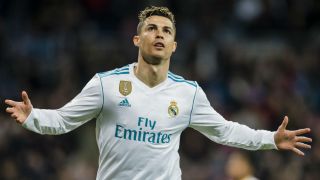 Ronaldo completed his €100million move to the Serie A champions earlier this week, bringing an end to his successful nine-season stay in Madrid.

He leaves as Los Blancos' all-time top scorer and a four-time Champions League winner with the team he joined from Manchester United in 2009.

Cancelo - who will line up alongside his international team-mate for the Old Lady after joining from Valencia last month - believes the 33-year-old will fit perfectly into Juve's well-oiled winning machine.

Speaking at his official unveiling on Thursday, Cancelo said: "It's an enormous pleasure for me and all footballers to play with a great champion like Cristiano Ronaldo.

"I'm sure he's going to raise the overall quality of the team and he'll help us to keep winning.

"He has a winning mentality and has won a lot in his career. At the same time, Juventus have claimed seven straight Scudetto titles, so I hope they will make a perfect match."