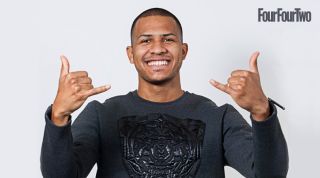 The Venezuela international notched a trio of mid-air efforts against Swansea in December – a feat only previously achieved by Duncan Ferguson for Everton in 1997 – to take his tally for the season to seven goals in 16 league games.

Rondon also used his noggin to help the Baggies beat Crystal Palace on the opening weekend of the season. However, speaking exclusively in the March 2017 issue of FourFourTwo magazine, he reveals that he much prefers to find the net with his feet.

“I must confess, ever since I was small, I hated heading,” he says. “But as time’s gone on, I have improved my technique. You obviously work on things, but I don’t think you can prepare for a hat-trick of headers. I have never done that before.”

The 27-year-old’s route to the Premier League has featured stints in his native Venezuela, plus Spain – working under Manuel Pellegrini at Malaga – and Russia, where he won a league title with Andre Villas-Boas at Zenit Saint Petersburg.

But the powerful frontman might not have become a footballer at all, having also excelled at bouncing the ball, as well as kicking it, when he was a teenager.

“I used to play lots of basketball and there was a point when I had to choose,” he recalls. “When I was about 13 I wanted to follow my hero, Michael Jordan. My dad convinced me that it was not a good idea as my background had always been about football. I’ve got a hoop in the back garden and I’ve not lost my touch. My son also joins in. He wins, of course!”

Read the full interview with Salomon Rondon in the March 2017 issue of FourFourTwo magazine. A South American special, we head round to Ronaldinho’s house to hear what the Brazilian trickster is planning next, chat to Manchester City defender Pablo Zabaleta about learning English while watching Coronation Street, reminisce with former Real Madrid forward Robinho and meet up with Bayern Munich enforcer Arturo Vidal. Plus, we find out why Oscar swapped Chelsea for China, look back on the early days of Diego Maradona’s career at Argentinos Juniors, hear some remarkable tales from football’s own Forrest Gump, aka Nelson Vivas, and find out how Chapecoense go about healing a club and local community following November’s plane tragedy in Colombia. Order it now, and then subscribe here!