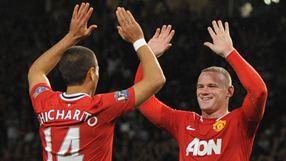 The pair missed Tuesday's 3-3 home draw with Basel in the Champions League as Rooney was recovering from a hamstring problem and Hernandez from a dead leg.

"Wayne and Javier Hernandez will be fit for tomorrow. They trained yesterday very well and I was pleased with that," Ferguson told a news conference on Friday.

"Jonny Evans also comes back, hopefully that will help us in the defensive part as we're certainly changing the back four at the moment."

After Rooney was injured in training before the match against Stoke City last weekend, Ferguson said the England striker could be out "for a few weeks" but he has made a quicker than expected recovery as he bids to continue his fine start to the season which has brought nine goals so far.

Although Rooney was also missing against Basel in the Champions League on Tuesday Ferguson said a shaky defence rather than a weakness in attack was to blame as United threw away a two-goal lead to trail 3-2 before Ashley Young's last-gasp equaliser.

Ferguson said his team had been rather "cavalier" in their approach and needed to tighten up.

"People say our performance was careless and we under-estimated our opponents and maybe there's an element of truth in that," he said.

"We could have scored goals as well but were too cavalier. We're attacking in the way we're playing at the moment and people can enjoy it but we have to do better defensively."

Unbeaten United have scored 22 goals in six league games so far and are top of the table on goal difference from neighbours Manchester City.