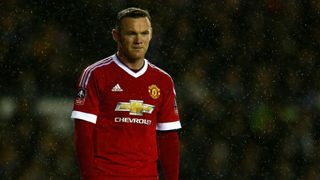 Manchester United captain Wayne Rooney believes the players should shoulder the responsibility for the club's lacklustre campaign instead of manager Louis van Gaal.

Rooney, who has six goals in his last six games, has played a big part in helping United to an improved start to 2016, but he believes he and his teammates were equally culpable in a horror month between November and December, which saw United go winless for eight-straight games in all competitions.

"It’s unfair to say it’s [down to] the manager," Rooney said.

"We’re on the pitch, so the players have to take a lot of responsibility for performances and results.

"We have to stand up and take criticism when it’s there. We want to win, of course — we always want to win — and we’re trying. Even when you’re giving 100 per cent, it doesn’t always come off."

The England international said that the manager had played his role in the revival by allowing his players to loosen up on the park.

Van Gaal denied that he had explicitly told the players to abandon his much-discussed philosophy after a disappointing 1-0 home defeat to Southampton - in which United managed just one shot on target - but Rooney said it was obvious that the players enjoyed their performance against Derby County in the FA Cup fourth round much more than their league encounter.

Rooney opened the scoring with a tremendous curling effort before Daley Blind and Juan Mata scored second-half goals to seal a 3-1 win.

"The manager gave us a lot of freedom to go and play and I think you can see the difference in the team," he added.

"You can see we were enjoying it, scoring some good goals and thoroughly deserved to win so hopefully we can put in another performance like this against Stoke [City] on Tuesday."