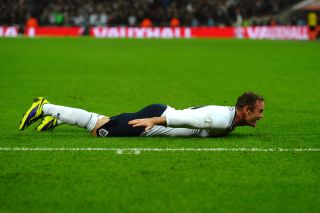 The Manchester United striker's seventh goal in six Group H games put his country on course for the victory over Poland on Tuesday night that ensured they will board the plane to Brazil next year.

Skipper Steven Gerrard put the icing on the cake with a second goal to seal a 2-0 win on a nervous night for Roy Hodgson's side at Wembley.

The three points ensured England finished top of the group and avoided the play-offs, with Ukraine consigned to second spot.

And Rooney believes England can head to South America with great optimism.

He told ITV Sport: "We have always remained positive. We have had a great belief in ourselves and from the manager.

"We have shown we are a good team and have got some fantastic young players.

"There is a good blend. We are excited and this is a good time to play for England.

"We knew it was going to be a tough game. They had a couple of breaks and they could have scored but we played some great stuff and had the confidence to go on and win the game.

"A big part of our preparations was being patient and thankfully we got the goal in the first half. We fully deserved the win."