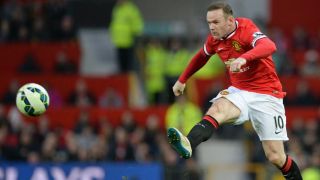 Rooney netted the third goal to bolster his team's hopes of a top-four Premier League finish as Old Trafford was treated to a rampant first-half performance on Sunday.

The England captain marked the goal with a boxing-themed celebration after a video emerged earlier in the day showing him sparring with Phil Bardsley at his house and apparently being floored by the Stoke City full-back.

"That's the world we live in today," Rooney told Sky Sports after the match.

"It was a few mates in a private house which has somehow managed to go on the front page of a national newspaper.

"It was me and a few friends joking around.

"I've been focused on the game. I think it's more interesting for other people rather than myself.

"You've seen today I've done a professional job, got on with the game and helped this team win 3-0."

He added: "It's in my own home, it's not public. It's what friends do - they mess around in the house and unfortunately it's made the front page of the newspapers."

Rooney's manager Louis van Gaal refused to criticise his player and adopted a more scathing tone when discussing the story, which was initially run by The Sun on Sunday.

"I think in what sort of world we live... I cannot imagine that we are talking about such a thing," Van Gaal said on Sky Sports.

"A newspaper is paying a lot for a video and then I have to answer questions about that.

"What is this world - twisted?

"I don't want to answer this question because I think it's ridiculous that we have to talk about such things."

Defeat for local rivals Manchester City at Burnley on Saturday means United are now just two points behind the second-placed defending champions after early goals from Marouane Fellaini and Michael Carrick set them on their way to the most impressive victory of Van Gaal's tenure.

"I think we've played well a few times this season," Rooney said. "The first half is probably the best 45 minutes we've had all season.

"In the second half we knew we didn't want to lose the advantage we had. We defended really well and made sure we saw the game out.

"We knew it was a big game with City losing and [sixth-placed] Southampton drawing [1-1 at Chelsea] before we came out.

"It was a big game for us to take the points off Tottenham as well. This is a great three points for us."