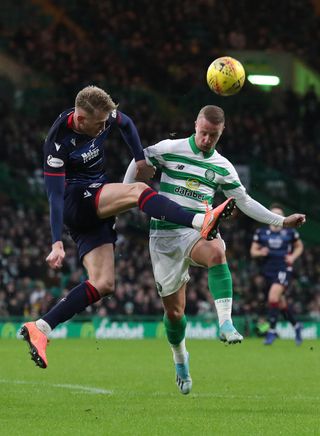 Ross County defender Coll Donaldson is “quietly confident” they can take something from Ibrox after being encouraged by parts of their Parkhead showing.

County squandered several chances before falling behind to a penalty and then seeing Odsonne Edouard came off the bench to hit a quickfire double and seal Celtic’s 3-0 win on Saturday.

The Dingwall side face a swift return to Glasgow on Wednesday to face a Rangers side hurting from their weekend defeat by Hearts and lifted by the end of the latest suspension for top goalscorer Alfredo Morelos.

Donaldson told County’s Twitter account: “The gaffers have spoken about our distances, spoke about filling in for each other and working as an 11 instead of 11 individuals. But there were positives to take.

“I felt we were right in the game up until they scored and even at the start of the second half felt comfortable and the Edouard comes on, hits a quickfire double and the game is out of reach.

“Guys who missed chances on Saturday, you would normally back them to score, so I have full confidence when the chances come around again, they will take them.

“It’s much the same again, you have to do a lot of defending.

“Morelos looks like he is going to come back in for them. It’s going to be a challenging night but it’s something we are looking forward to and maybe quietly confident about taking something from the game.

“You have to believe that, there is no point playing these teams if you roll over and get beat.

“We will be confident we can carry out our game plan and take three points, or even a point would be a great point.”