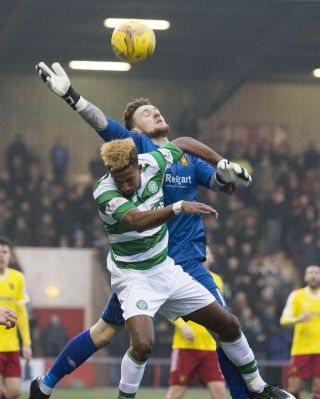 Ross Stewart will use the frustration of sitting on the sidelines for two seasons to cling on to the Livingston goalkeeper’s jersey.

The former Albion Rovers player only featured in four cup ties during a year with St Mirren and then had to wait until May last season for his Livingston debut.

But he earned the gloves for Saturday’s goalless Ladbrokes Premiership opener against his former club, Motherwell, after sharing goalkeeping duties with on-loan Aston Villa player Matija Sarkic during the Betfred Cup group stages.

And he is determined to sustain his status as the club’s new number one.

Speaking ahead of Saturday’s trip to face St Johnstone, Stewart said: “The clean sheet was nice. The main thing for me was being on the pitch.

“It’s been a tough couple of years sitting on the sidelines, but to get that nod and get the start, I was ready.

“The manager said it was there for me to lose. He brought in Matija who is a very good goalie and we have been going toe to toe. I got the nod and it’s up to me now to keep that jersey.

“I am using that couple of years sitting on the sideline to keep me in there and keep the fire in my belly.

“It’s tough but you need to learn from it. I was behind two good goalies – Craig Samson at St Mirren who went on to win the league and Liam Kelly last year who got a really good move from it.

“I couldn’t be too down but now I am in there I can think back and know what the feeling was like sitting there and know that I don’t want to be back there.”

Despite the frustration, Stewart used his time as deputy to improve.

“We have good coaching staff here, Tony Caig is very good at that, if there is anything you feel you have got to work on, he can take you aside and do that,” he said.

“You can do analysis as well. Liam did very well last season and I can learn a lot of things off him, Craig as well the year before.

“You just have to be patient, focus on yourself and keep believing and that chance will come.”

Stewart was handed a contract extension on the eve of the season opener, tying him to the club until 2021.

“That was really nice,” he said. “They could have waited to see how I reacted in the league but it was a nice little confidence boost.”