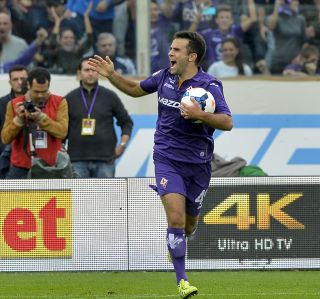 The Italy international has had a blistering start to the Serie A campaign, leading the goalscoring charts with eight strikes in as many top-flight appearances.

His latest success saw him score a 15-minute hat-trick as Fiorentina overturned a two-goal deficit to defeat reigning champions Juventus 4-2 at the Stadio Artemio Franchi on Sunday.

Rossi's form is even more impressive considering he has missed the best part of two seasons due to an anterior cruciate ligament injuries in his knee.

And Prade believes the best is yet to come from the 26-year-old as he continues to reach full fitness.

"Giuseppe is still not in the best shape, he can still improve a lot," he told Radio Anch'io Lo Sport.

"But we are very proud of him, he is not even at 70 per cent and he is already decisive. He’s still a bit behind physically."

Fiorentina swooped for Rossi in January and Prade revealed that they were convinced to move for the former Newcastle United striker after consulting two of his Villarreal team-mates.

He added: "We decided to sign him after talking with Gonzalo Rodriguez and Borja Valero.

"They told us that he was the best they had ever played alongside. That was when the desire to get him was born."